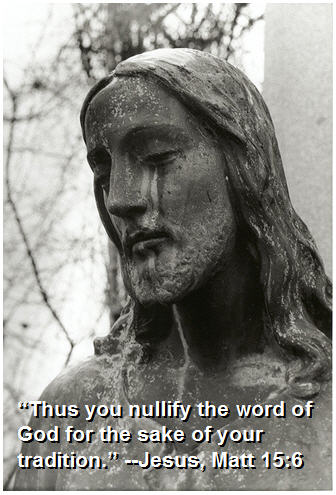 What did Jesus say about hell? Did Jesus really talk more about hell than heaven (common myth)? What about the other biblical writers, like Paul? Why do Christians say God will torture unbelievers forever in hell? It’s a false doctrine!

God used the clearest words He could throughout His word, the Bible:

For God so loved the world that he gave his one and only Son, that whoever believes in him shall not perish but have eternal life. (John 3:16)

The Bible is very clear on this. It is the Christian traditions we are taught about eternal torment in hell that make us mentally change the words “perish,” “death,” “die,” “destruction,” “destroy,” and turn them into “eternal torment in hell.” (See Chapter One of HELL KNOW for important details).

It’s like the Pharisees that Jesus dealt with while on earth:

“Thus you nullify the word of God for the sake of your tradition. You hypocrites! Isaiah was right when he prophesied about you:

‘These people honor me with their lips,
but their hearts are far from me.
They worship me in vain;
their teachings are but rules taught by men.‘”  (Matt 15:6-9)

Jesus clearly and specifically told us that God can “DESTROY both SOUL and BODY in hell.” (Matt 10:28-29) That’s not a parable…it is His clear teaching.

In Genesis, God prevented Adam and Eve from taking the tree of life and living forever:

And the Lord God said, “The man has now become like one of us, knowing good and evil. He must not be allowed to reach out his hand and take also from the tree of life and eat, and live forever.”(Gen 3:22)

If we are created with immortal souls, then why would God need to prevent Adam and Eve from eating from the Tree of Life? If we already “live for ever,” why did He want to prevent them from living forever?

Humans are not created with immortal souls. There is no scripture in the Bible that says this. In fact, the Bible actually says:

Although they claimed to be wise, they became fools 23 and exchanged the glory of the immortal God for images made to look like a mortal human being and birds and animals and reptiles. (Romans 1:23)

The false teaching of the immortal soul was first taught by the devil:  “‘You will not surely die,’ the serpent said to the woman.” (Gen 3:4)

Paul, said that Jesus, “has destroyed death and has brought life and immortality to light through the gospel.” (2 Timothy 1:10)  He also said, “For the perishable must clothe itself with the imperishable, and the mortal with immortality.” (1 Corinthians 15:53-54)

We are not imperishable or immortal until we accept Jesus as our Savior. The gift of immortality (eternal life) is conditional on our acceptance of Jesus as the Son of God and His payment for our sins. Humans are mortal (perishable) until God gives them the gift of immortality. This is why Jesus said over and over that He came to give us eternal life. If we already have eternal life (immortality), then Jesus did not need to come down to earth to give it to us.

Jesus never once said that He came to save us from hell. (Look it up yourself!)

Yes the devil, beast, and false prophet will be tormented in the lake of fire forever. They are spiritual creatures…not human creatures.

Yes, there will be a final judgment as written in God’s word:

Then I saw a great white throne and him who was seated on it. Earth and sky fled from his presence, and there was no place for them. And I saw the dead, great and small, standing before the throne, and books were opened. Another book was opened, which is the book of life. The dead were judged according to what they had done as recorded in the books. The sea gave up the dead that were in it, and death and Hades gave up the dead that were in them, and each person was judged according to what he had done. Then death and Hades were thrown into the lake of fire. The LAKE OF FIRE IS THE SECOND DEATH. If anyone’s name was not found written in the book of life, he was thrown into the lake of fire. (Rev 20:11-15)

The lake of fire (hell) is where God will destroy death, and Hades/Sheol, and those who are not written in the book of life. It clearly says in 1 Corinthians 15:26-27, “The last enemy to be DESTROYED is death.”

Yes God’s judgment will be very unpleasant, as He has warned, and people will be sad and angry, weeping and gnashing their teeth, but God never said they will weep and gnash forever!

The first death is the physical death of a human body. The second death is the destruction of the human soul. God is not going to torture unbelievers for all eternity. That would be evil and God is not evil. There is no justice in eternal torturing. God’s eternal punishment is eternal death…the opposite of eternal life…where unbelievers will cease to exist and are eternally dead. There is no resurrection from the second death.

It’s interesting that the disciple John never tried to scare people into believing in Jesus…not in the Book of John or in his letters (John 1-3). In fact, you will not find the words “hell,” “gehenna,” “hades,” or “lake of fire” in the Book of John at all! (And John is the author of Revelation.)

When Jesus told the parable of the rich man and Lazarus, He was speaking of Hades/Sheol (which God will destroy in the lake of fire, Rev 20:14) and He was teaching that the rich do not automatically get eternal life. He was also teaching that even after His resurrection, many will not believe in Him. He never meant it to imply eternal torture…that is completely against God’s loving and merciful nature.

It’s hard to unlearn the false traditions that we were taught growing up, but believe what the Bible actually says.